Severe flooding caused by frequently occurring and high intensity storm events can no longer be called unusual or unprecedented. Extreme weather events in recent decades is closely linked to climate change factors such as an increase in Sea Surface Temperatures (SST) which is observed to be increasing 24% faster than a decade ago.1

Every bit of warming increases precipitation levels, which directly correlates to storm intensities. 2Our global temperatures are at a record high average of 1.1⁰c higher than the last century and the harsh reality is that these record readings and subsequent flooding events are not anomalies, they are new patterns that will only continue to exceed year on year.3

The UN Intergovernmental Panel on Climate Change (IPCC) warned in 2014 that the UK was set to receive about 10% additional rainfall on average per year by 2100, with evidence of greater flood risk on the island.4 We are now seeing those projections play out as climate experts in the UK have noticed that the average number of storm events since 2016/2017 has increased from five to eight and are recurring in quicker successions than ever before, a recent example being the twin storms Ciara and Denis of February 2020.5 The recent devastation caused by Storm Alex during October 2020 is evidence of extreme climate disruption caused by countries and is a forewarning as Europe aims to become the world’s first climate neutral continent by 2050.6

Telespazio UK (TPZ UK) is working on the EU H2020 FORESEE Project – a multi-disciplinary consortium of experts working to facilitate the use of existing methodologies and tools to study the risk and costs associated with the impact of extreme weather events. The research will also integrate satellite and terrestrial data in the analysis and assessment of hazards with their respective impact on passengers and freight terminals.

The Royal Institution of Naval Architects (RINA), an esteemed partner in the FORESEE Project consortium, has documented the impact of Storm Alex in Italy and France, using a series of photographs. In particular, RINA has focussed on the storm’s impact on road transport links, a critical backbone for communities and their connectivity. 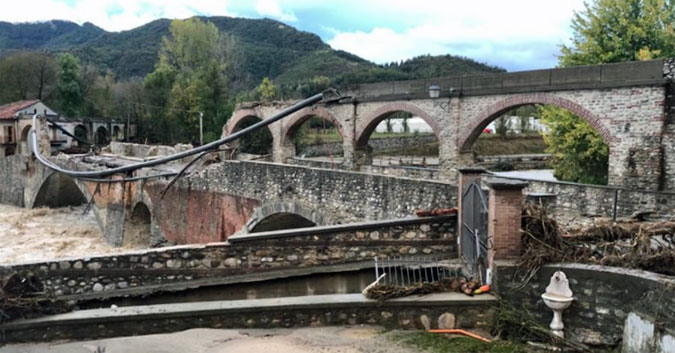 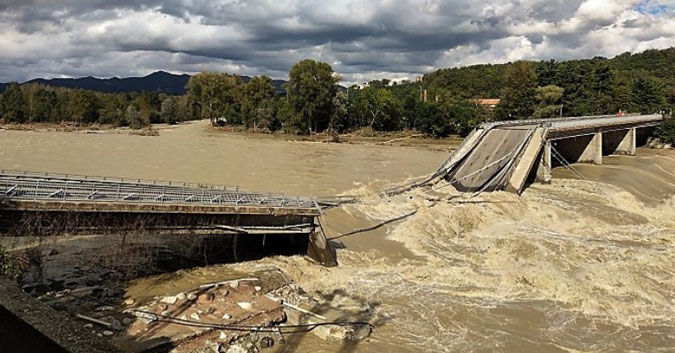 Above left: Collapse of the Historic Roman bridge In Bagnasco (Cuneo) from the impact of the Tanaro River. Above right: The high level of the Sesia river caused the collapse of the Romagnano bridge in Novara 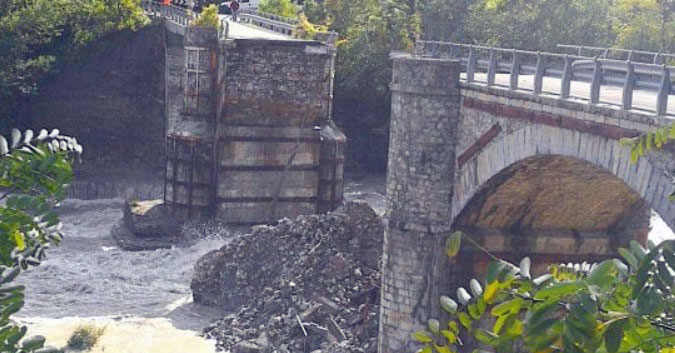 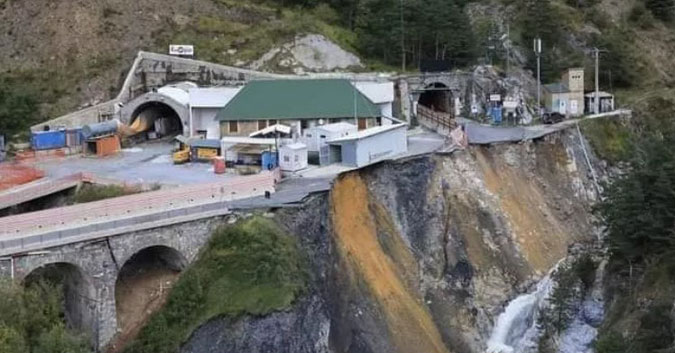 Above left: The State Road, that connects Genoa to Piacenza, is closed, increasing the travel time and the distance of the road section. Above right: The road to the international Tenda Tunnel between Italy and France collapsed due to the impact of the Roya River.

The transport, economic and social impacts of severe weather

The aftermath of a single storm event highlights the resilience of critical infrastructure to extreme weather events, such as heavy rainfall, high temperatures and winter storms. The economic and societal dependency on these infrastructures – especially in flood prone countries such as the UK – makes it one of the most demanding challenges for the government. The UK has historically suffered from flooding and suffers from an exponential increase in economic damages to the country’s infrastructures and societies. Prior to the 2020 storms, the last time several storms struck in quick succession – Desmond, Eva and Frank, in December 2015 – they caused damage valued at £1.3bn.7 The February 2020 storms, Ciara and Denis, incurred an estimated insurance loss of £350m-£425m and counting8. We are yet to understand the economic impact of Storm Alex. A report by the Environmental Agency notes that critical transport infrastructures such as road and rail links incur significant economic impacts from floods, reportedly an estimate average of £12m for rail transport and £220m for road transport.9

Public authorities understand that specific types of bridges are sensitive to different failure mechanisms, so ensuring awareness of the bridge health and its surroundings is the first step for an effective risk management of the asset. Successfully chosen under the European Union’s Horizon 2020 research and innovation programme, FORESEE tries to define a methodology that allows the determination of the Level of Criticality of different type of assets composing the network, such as bridges, road segments (slopes, embankments and trenches) and tunnels against hazards of this type derived from heavy rainfall and flooding events.

A critical component of the project led by Telespazio UK is furthering the development of its Satellite Structural Health Monitoring (S-SHM) tool to detect structural deformation. Using big data analytics, S-SHM shall characterise assets and their potential structural vulnerabilities delivering increased situational awareness before, during and after extreme events.

Through exclusive access to the COSMO-SkyMed X-band satellite information, combined with C-band Copernicus Sentinel-1 satellite data, Telespazio UK demonstrates the effectiveness of Interferometric Synthetic Aperture Radar (InSAR) techniques to detect millimetre ground deformations from subsidence, helping to gather a wealth of information on the stability of the infrastructure and its surroundings. Ground motion detected by Synthetic Aperture Radar (SAR) interferometry is also useful to identify potentially hazardous slopes across wide areas, and when combined with other data sources, produces cost-effective and accurate landslide prediction models. Ultimately, the data from the S-SHM tool, combined with the landslide prediction model being developed by the University of Edinburgh, shall be integrated into a Situational Awareness System (SAS) notification tool for stakeholders to receive 3D visualisations of the failure points within a structure and to issue failure alerts when predicted structural motion exceeds a critical threshold for the asset.

In this case, the S-SHM tool can support and improve operational efficiencies for management staff responsible for inspections and maintenance by providing accurate information on historical site data, hazard and vulnerability information and early warning information. S-SHM as a service has many widespread benefits to safeguard critical transport network from extreme weather events and is a key assessment tool of an asset’s performance and condition. A weather independent service, S-SHM allows multiple bridges to be managed simultaneously with planned target inspection, long-term enhanced awareness of maintenance requirements, and predictive analysis of structural motion and deformation estimates of surrounding land. With the now persistent threat of more frequent and more intense weather events because of a changing climate, it is imperative for all transport authorities to adopt necessary measures to forecast, maintain and prepare critical infrastructures as part of its own climate risk disclosure and operational resilience. Incorporating S-SHM into best practices will bring exceptional cost savings and operational benefits to all stakeholders involved from public authorities and engineering contractors to insurance providers.

Europe has a number of bridges with important historical value – all of which are essential to the local and wider economy and society. The trend towards urbanisation continues to rise, demanding effective monitoring strategies to identify structural problems before they become critical and endanger public safety. The climatological threats on our transportation infrastructure and its alarming economic impact raises many questions around the understanding and preparedness for these risks. The events that hit Italy and France in October 2020 highlight the need for state-of-the-art Risk and Resilience Assessments to be adopted by the transport sector. The ongoing success of the FORESEE project is geared to provide short and long-term resilience schemes for rail and road corridors to reduce the magnitude and/or duration of disruptive events produced by humans or nature.