You are visiting Telespazio in the UK
James Webb
Space Telescope
Share
We spoke to Telespazio employees, Dr Alvaro Labiano and Dr Arnaud Masson, both based at the European Space Agency’s (ESA) European Space Astronomy Centre (ESAC) in Madrid, about the exciting work that they are both involved with on the James Webb Space Telescope that is planned to be launched from the Kourou Space Centre in December 2021.

1. What is the James Webb Space Telescope and why are scientists so excited about it?

The James Webb Space Telescope (JWST, or just "Webb") is the largest, most complex and powerful space telescope ever built. In astronomy, size matters, and a larger telescope means the better resolution and ability to capture light from faint objects. Previous infrared observatories, like the Infrared Space Observatory (ISO), Spitzer Space Telescope or Herschel Space Observatory showed that the infrared is one of the most interesting regions of the electromagnetic spectrum for astronomy. The JWST, with its optical systems and sensitive instruments, will pierce even deeper into the infrared Universe and push even further, all discoveries revealed and hinted at by the previous extremely successful missions.

2. Why is the James Webb Space Telescope considered as the successor of the famous Hubble telescope?

It’s the spiritual successor really. Hubble Space Telescope (HST or Hubble) revolutionised many fields of astronomy. It has been operating for over 30 years now and is likely to be the most productive space telescope in history. Webb will continue Hubble’s legacy as the next great space observatory. However, its instruments and capabilities (even for its unusual external appearance!) is completely different. Technology has evolved greatly since Hubble was built. Webb’s detectors are considerably more sensitive and larger than those in Hubble, allowing studies of the faintest and most distant objects in the Universe. The JWST has seven times the light collecting area, and 100 times the sensitivity of Hubble. As an example, Webb could detect the thermal signature of a bee on the surface of the Moon.

In addition, Hubble is very close to Earth, roughly 570 km above, and we were able to service and repair it when needed. JWST, on the contrary, will be 1.5 million km away, so it will be impossible to fix if any systems break. That’s one of the reasons why every JWST subsystem has been tested so heavily. Another difference is the orbit where these telescopes operate. Hubble worked mainly in the visible regime, with a slight coverage of ultraviolet and infrared, while Webb will cover longer wavelengths of light than Hubble (near and mid-infrared).

3. People say it is most expensive space telescope ever, at more than 11 billion dollars! Could you tell us other key numbers about this mission? 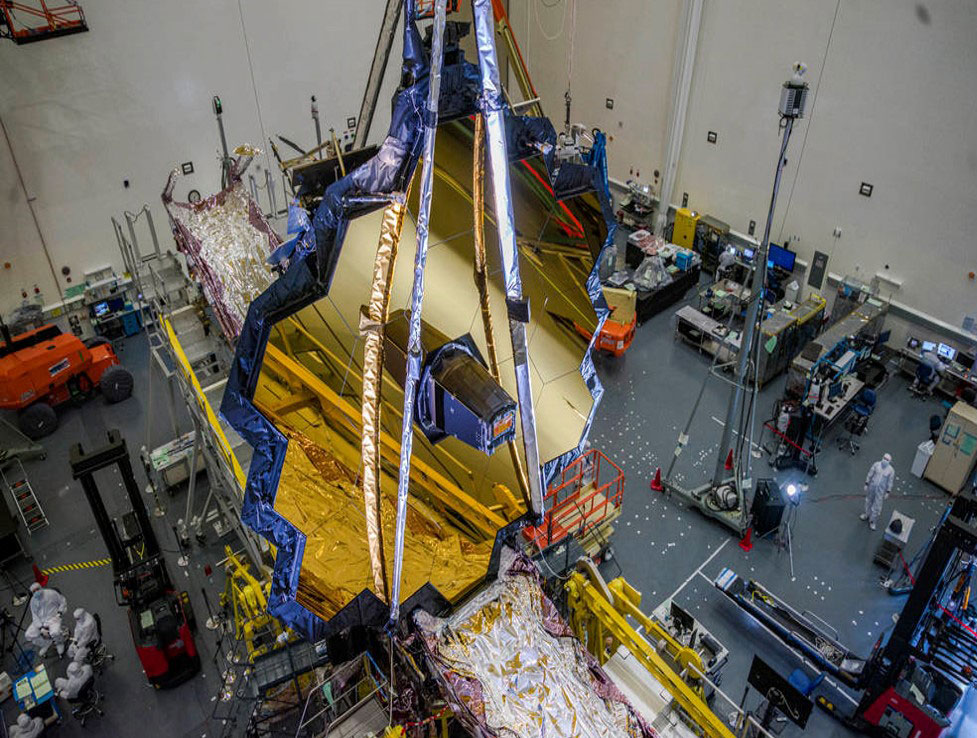 It is, at least to date. Moreover, that subject makes for a very interesting debate at all levels. Concerning large space observatories, it is clear that as we push our exploration of the Universe further and further (Webb will try to observe the first galaxies ever formed!), we will need more and more ambitious and incredibly complex machines, which will carry a really high price tag.

In the case of Webb, the telescope consists of a 6.5-metre primary mirror, divided into 18 1.3-meter, hexagonal segments. These mirrors are covered in gold (roughly 3 to 3.5 grams per segment, worth about US$2000 in total), as it is one of the most efficient reflecting materials for infrared light. Each mirror weighs approximately 20kg, plus another 20kg due to the machinery behind the mirrors, to keep them in focus.

The whole telescope weighs 6.5 tons, and measures 21 x 14 x 12 metres. Its scientific instruments, placed behind the primary mirror, on the cold side of the observatory, will operate at temperatures between -233 and - 267 degrees C. Thousands of scientists, engineers and technicians from 14 countries have worked on and contributed to building, testing, and integrating Webb during the past 25 years, since its formal recommendation in 1996. In addition, there is of course all those unaccounted for numbers like the amount of sleepless nights and crazy weekends trying to solve those unexpected challenges! We tested every single system, making sure we have the best possible observatory and scientific instruments we could design. 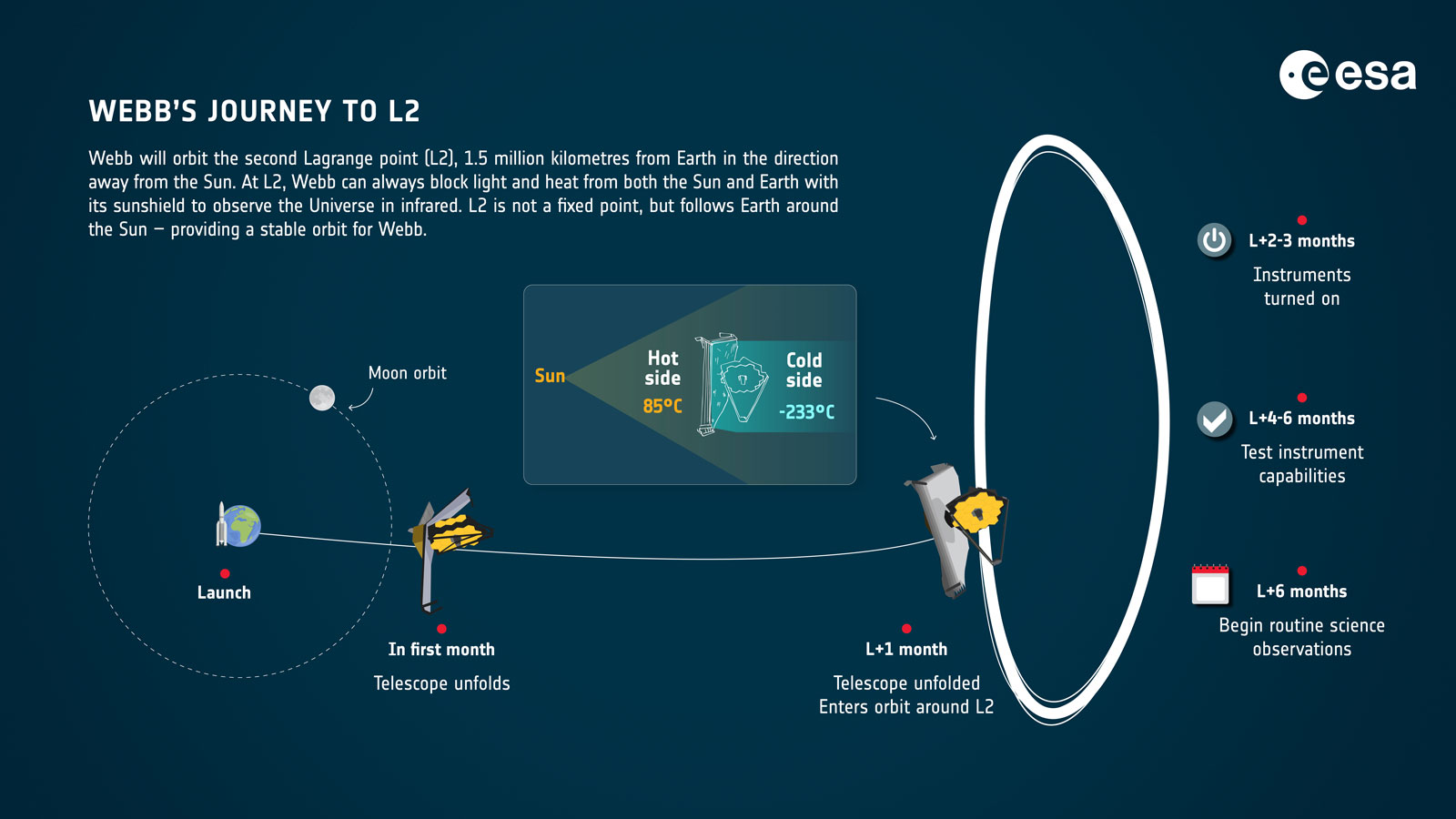 4. How is Telespazio involved in this project?

Since 1st July 2021, Telespazio UK has provided scientific support, in the form of a service, to the development of all ESA science archives. These archives are public and serve more than 15,000 researchers around the world every month. Alvaro is one of the 10 experts dedicated to this service and is focused on JWST. His main role is to liaise between ESA and the JWST scientific community to guide and follow the software development of the European JWST archive. By being an active researcher, with 15 years’ experience in JWST, he is one of the European experts in the MId-Infrared Instrument (MIRI) and European lead coordinator of the 3D spectrometer in one of the four JWST instruments: MIRI. Additionally, Telespazio France is an industry partner of the of the Kourou Space Centre, from where JWST will be launched in December 2021

5. What is the European contribution to JWST?

Webb is a collaboration between the Canadian, European and US Space agencies (CSA, ESA, NASA). While NASA covers many of the expenses and services, Europe built and provided the Near infrared Spectrograph (NIRSpec) and contributes to 50% of MIRI. ESA also provides the launch segment and supports the Ground Segment and mission operations. European scientists are also represented on all advisory bodies of the project. In return for its contributions, ESA secures access for European astronomers with a minimum share of 15% of Webb observing time.

6. So Alvaro, what were the biggest challenges facing this international consortium when building Webb?

As you can imagine, the amount and size of challenges associated with such a mission are huge and would take hours (if not days!) to talk about all of them. So I will list my “favourites” i.e. the ones that most astounded me.

As JWST is an infrared observatory, it needs to keep all the science instruments operating at extremely cold temperature. Otherwise, the telescope’s own infrared emission would contaminate our observations. Keeping a working spacecraft cold can be very expensive and limits its operations life. The teams working on Webb discovered two main solutions to passively cool the observatory, or at least the science side. The first one is to place it in an orbit around the so-called Lagrange point L2 – a point of gravitational stability 1.5 million km away from Earth. In addition, making sure JWST can maintain a stable pointing and high observing efficiency during long observations. 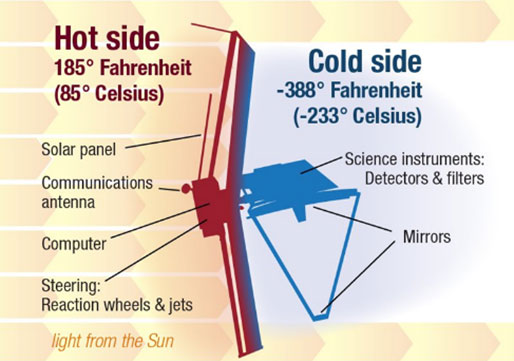 The second one and a huge engineering challenge was to incorporate a solar shield within the observatory. For this solar shield to work, it had to be large enough (the size of a tennis court) to block all the light and emissions coming from the Sun, Earth, and Moon. It had to be extremely light and foldable, and it had to resist the impacts of all the micro-meteors that will hit it during the expected 10 years of JWST operations. Finally, it needs to create a temperature difference between its hot and cold sides of more than 300 degrees Celsius. 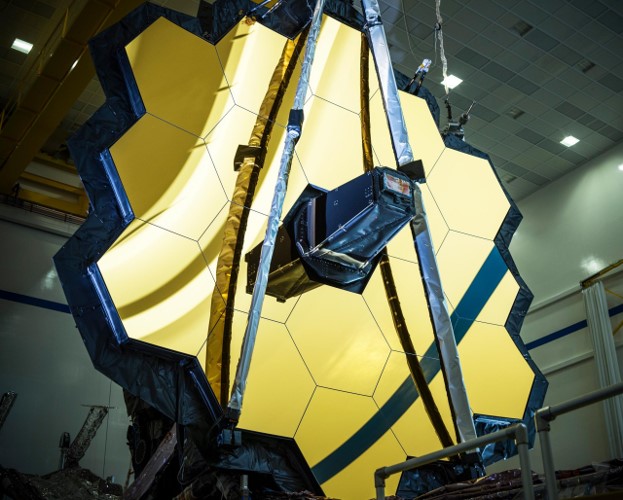 My third ‘favourite’ challenge was to design and build the largest mirror ever placed in space. Webb’s primary mirror consists of 18 hexagonal, 1.3 meters wide segments that make up a 6.5-metre mirror. These mirrors were built with Beryllium, which provides the lightness (each segment weighs 20 kg) and resistance necessary for a space observatory. JWST uses 132 actuators (tiny motors behind each segment to keep the 18 mirrors aligned, so we can recover and focus a smooth 6.5 metre mirror. Each mirror is covered with an extremely thin layer (about a human’s hair thickness) of gold. They used gold mainly for its high reflection properties of infrared light. Each segment used about 3.5 grams of gold in total. If we put all the gold used in Webb together, it would be the size of a golf ball.

The JWST will be launched with an Ariane 5 rocket. Even though it is able to put heavier payloads in orbit, Webb is too big to fit in its fairing. Thus, the engineers needed to design JWST as a foldable structure that would fit in the rocket, and would unfold to its operating shape, on its way to L2. Basically, all structures on Webb will fly folded, and this complex folding earned the observatory the nickname “the origami telescope”.

7. Another question for Alvaro – What is your past expertise in this mission?

I joined the JWST European team back in 2006, (with my first postdoc!). I started as part of the MIRI Test Team, which was responsible for all the ground calibrations before delivery to NASA in 2012. Those were quite exciting times, as our results will help define the last details of the MIRI Flight Model. It involved countless hours in the testing facilities at RAL, designing and carrying out tests. Moreover, I acted as a liaison between the engineering team at INTA (Instituto Nacional de Técnica Aeroespacial, Spain) and the Test Team, as INTA was developing the optical bench that recreates the input signal from JWST into MIRI during the RAL campaigns. After delivery to NASA, I had a little JWST hiatus (also related to the seven years launch delay) and got back to the mission in 2014, as part of the Swiss team of MIRI. I then became European coordinator of the 3D spectrometer of MIRI (the MRS), with responsibility for the design of the pipeline and calibration products of the MRS. We created algorithms, reference files, steps, dataflows and so on, to make sure the MRS would provide the best science possible when in orbit. It also involved some heavy testing campaigns of the whole instrument module at NASA facilities (Goddard and Johnson Space Flight Centers). Right now, we are preparing and putting the final touches to all the commissioning activities that will take place right after launch and until summer 2022.

8. Final question to both Alvaro and Arnaud – Could you tell us the key scientific objectives of this mission?

Gladly! Webb is a very powerful infrared telescope, and we plan on taking advantage of that. Webb was designed with three main science objectives in mind:

So basically, Webb will let us study in incredible detail all fields of astronomy, from the closest objects in our Solar System to the light of the furthest objects in the Universe. Of course, we are also looking forward to all those unexpected discoveries and findings Webb will uncover that we have not even thought about!